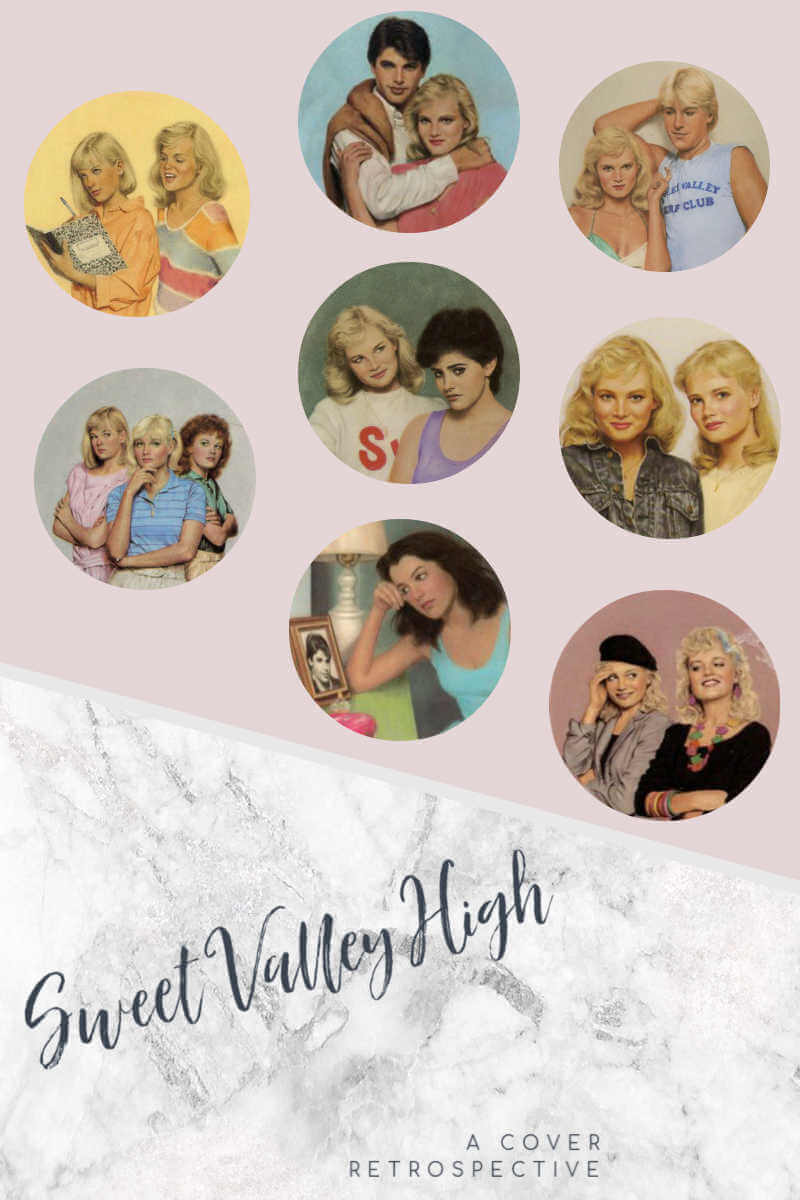 The Sweet Valley High covers (the originals, at least) were iconic. I first came across them in my local library and I was hooked in by the glamorous cover models and soft pastel palettes.

The covers were painted by James Mathewuse, a book cover artist known for his work on the Nancy Drew and Hardy Boys series (incidentally, he also created the cover art for another lesser-known series called Dream Girls – which I would love to get my hands on one of these days!)

Although I actually read a couple of the Sweet Valley Twins books (bought for me for my birthday) before discovering the earlier series set in high school, the SWH series was the one that really grabbed me. I have discussed it before here so I am not going to go into the specifics of the series. Rather, I am focusing on the covers themselves.

Although there have now been several iterations, I still prefer the original cover art for these books and ended up re-buying books 1 through to 100 plus some of the later books and special editions over the last couple of years. They are very much a product of their time (1980s to 1990s) which just makes them all the more awesome.

The above images shows how the cover for the very first Sweet Valley High book Double Love changed over the years, eventually coming right back around to an updated version of the original. The first edition was released in 1984 and it is astounding in all of its pastel glory! The Wakefield twins iconic sunkissed-blonde looks are on full display.

The actual model for both Elizabeth and Jessica was an actress called Jonna Lee Stack who appeared in a soap opera called Santa Barbara (you can see a clip here). She also starred in a movie called Paradise Motel (the full movie can be found on YouTube but I’m not going to link it here – a google search will lead you right to it).

I found this information on Cliquey Pizza (a commenter called Kathleen provided this information here) and I’ve seen it confirmed elsewhere in this post by a fellow blogger Kitty on her blog Red Lemonade – one of the comments seem to suggest that the actress herself confirmed this but there is no way to know for sure if it was actually her or not since it it is an anon user.

The images above are taken from stills of the movie Paradise Motel (sorry for the low quality!) It’s actually eerie watching clips from this movie – it’s like seeing both Jessica and Elizabeth Wakefield in the flesh! You can see how closely the artist based the twins on Stack – it’s almost uncanny… the last picture could almost be Todd and Liz chowing down at the Dairi Burger!

A few more cover changes occurred in 2007 (an almost-cartoony illustration – a complete departure from previous iterations) and 2008 (with new cover model Leven Rambin – who had a small role in the Hunger Games film and also starred in soap All My Children).

The eBook versions brought back the original art with a slightly new composition but had far less pastel colours! Guess they went out of style, huh? 😉

Here are some more of my favourite covers – from the wacky to the sublime! These covers were so awesome to my younger self!

Look closely at the cover for Wrong Kind of Girl – doesn’t that dark-haired girl look like someone you’ve seen before? Why it’s Ms. Courteney Cox (again!) She sure did a lot of modelling for young adult covers back in the 1980s. She is depicting Annie Whitman – a girl who has a bad reputation and is pronounced a slut by Jessica Wakefield (of all people!) Jessica who managed to date nearly every boy at SVH (not slut-shaming her but FFS Jessica – pot calling kettle black much, don’t cha think?)

The beefy guy on the cover of Heart Breaker always looked kinda familiar but Robin Hardwick pointed out in her published guide to SVH: If You Lived Here, You’d Be Perfect By Now that the guy looks like a dead ringer for William Zabka (of movie The Karate Kid and later spin-off series Cobra Kai fame) and now I can’t unsee it! 😆

I remember buying Bitter Rivals and Slam Book Fever just before a week-long school trip (in primary school) and reading them on the bus thinking I was the bees knees – such a grown-up haha!

Bruce Patman. Sigh. So dreamy… or not! I never really saw the appeal of the Patman (too many red flags even for my younger self!) and he just looks like a total sleaze on the covers so… I do remember liking Regina Morrow and wishing she wasn’t attached to his lame ass. When she finally does get shot of him (after he goes back to his cheating ways) she ends up dying of a cocaine overdose! Poor girl. On The Edge was a rough book for tween me – I can probably thank it for never getting into drugs myself – just might die of an undetected heart condition like Regina!

The cover for Teacher Crush is a hoot – I know Olivia Davidson was a quirky, hippy-type character but jeez, she looks like a 40-year old teacher herself here haha! The outfits on Who’s Who? also still give me a right chuckle too!

Well, hope this was a nice little trip down nostalgia lane. Here’s some more Wakefield twins for you guys below!

From Page To Screen

Never, Ever, Getting Back Together