Top Ten Books I Would Like To See Made Into Movies

I have decided this week to list the books I would love to see made into movies. Because this week is a freebie topic, and since I love waxing lyrical about books and movies, I have decided to combine the two for this week’s theme. 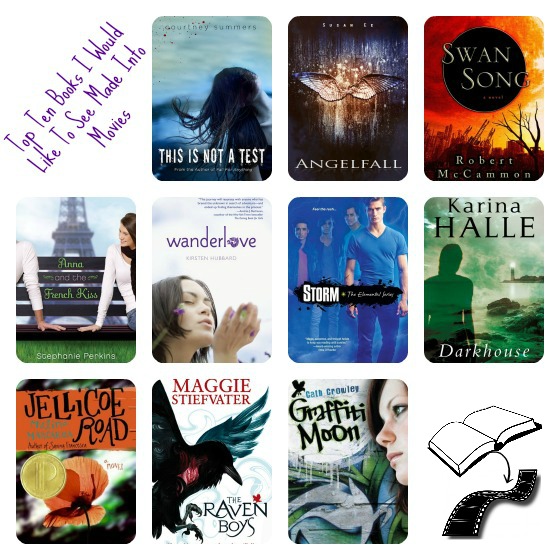 1. This is Not a Test by Courtney Summers

Zombies. Teenagers trapped in a boarded up school. Zombies. Group falling apart as tensions rise. Zombies (I am a zombie fan – could you tell?)

I have heard that the rights have actually been optioned for a film. I can totally see why – end of the world with Angels – sign me up!!

I read this book for the first time when I was a teenager and I have always thought that this would make a terrific movie with its post-apocalyptic setting.

4. Anna and the French Kiss by Stephanie Perkins

This would make a simply delightful movie – the setting and the cute romance could make it a sure-fire hit!

The setting is Central America so this could be a wonderful cultural movie. Not to mention the fact that the romance is pretty sweet too!

I think my ovaries would explode if they were to make a movie that featured the Merrick brothers (plus the plot is pretty good too)!

This could be deliciously spooky – I really love a good horror and the plot of this series would definitely make for some really creepy movies.

This is currently being adapted by the author into a film script – if Looking for Alibrandi is any indication, this could also be fantastic.

9. The Raven Boys by Maggie Stiefvater

This is one of my new favourite series ever and it would make a great movie. Blue and the boys would be amazing on the big screen.

This could have a very Nick and Norah feel to it(I really enjoyed the movie adaptation of the David Levithan and Rachel Cohn penned book).

Top Ten Books That Will Make You Swoon

Science Fiction Novels That Should Be Mo