It’s been a long time since I did a Friday 56 post but I just had to share a snippet of this vintage young adult classic. I was a huge Pike fan as a teenager and I guess I never really grew out of his books! 😉

The Midnight Club by Christopher Pike 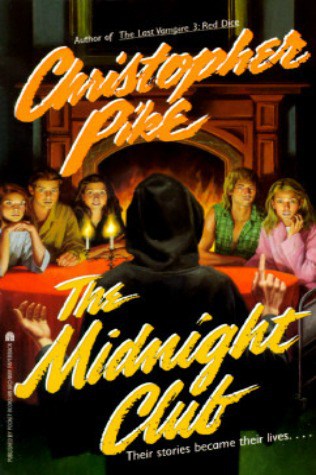 They were all going to die.

Rotterham Home was a hospice for young people, a place where teenagers with terminal illness went to die. Nobody who checked in ever checked out. It was a place of pain and sorrow, but also, remarkably, a place of humour and adventure. At the hospice was a group of five young men and women who called themselves the Midnight Club. Every night at twelve they met and told each other stories – tales of intrigue and horror, of life and death. True stories, made-up stories, and stories that fell somewhere in between.

But one night, in the middle of a particularly scary story, these five people make a pact with each other that says that the first one of them who dies is to make every effort to contact the others – from beyond the grave.

Then one of them does die. And the story begins. The most wonderful story. The most horrible.

“Well?” Spence said finally. “Don’t tell us you don’t know what happens next.”

“I do know,” Anya said reluctantly, her face oddly serious.

Anya allowed a faint smile. “Since this is a story about deals with the devil, Ilonka, I find your choice of words ironic.”

Books For My Younger Self

« A Day in the Life: Personal Post
Stacking the Shelves #72 »

6 responses to “The Friday 56: The Midnight Club”